TEST APES WORLD HEADQUARTERS HAS MOVED--WE ARE NOW LOCATED AT:

Future communications will come from there.
All of the original posts and whatnot will stay here as a "vault" of sorts.


Great News in the world of TEST APES.   I can't keep up with all the press Dannys been getting.  Here is some links:

This week he doesn't just have another article out about him, but he is actually on the COVER of FRETBOARD JOURNAL, and there is both an interview in the beautifully packaged magazine, as well in a podcast which you can check out by clicking the link right HERE...  And YEA! TEST APES are mentioned in both...good job on top of an already good job DANNY! Slowly but surely the word will get out.

The press and attention given to our boy Danny since receiving the Steve Martin Award has been great and well deserved, and TEST APES hope to make use of this momentum...  That said, we hope to have some new releases soon:  a FULL LEGNTH LP and a little 2-song thing are in the works!

But we have one release to announce right NOW:  On our BANDCAMP page we have another 3-song live EP from the show we just played last night at the FUNHOUSE in SEATTLE...where you can get a sneak peak of another song from our upcoming LP...

To link over there...CLICK HERE 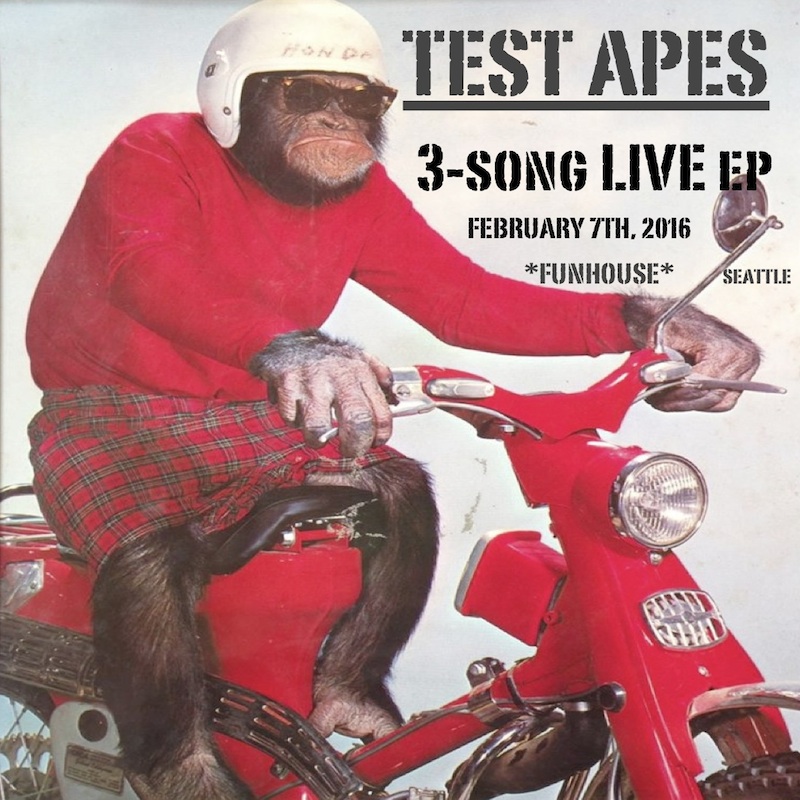 TEST APES WILL BE PERFORMING IN SEATTLE ON DECEMBER 23RD, 2015: 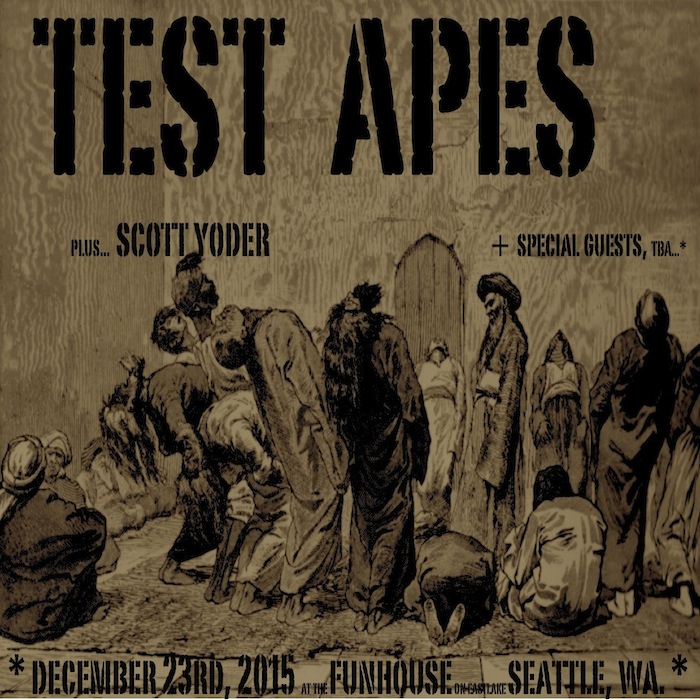 We made a bunch of merch for the show, and some of it is for sale in the store here, too...that's right, physical copies 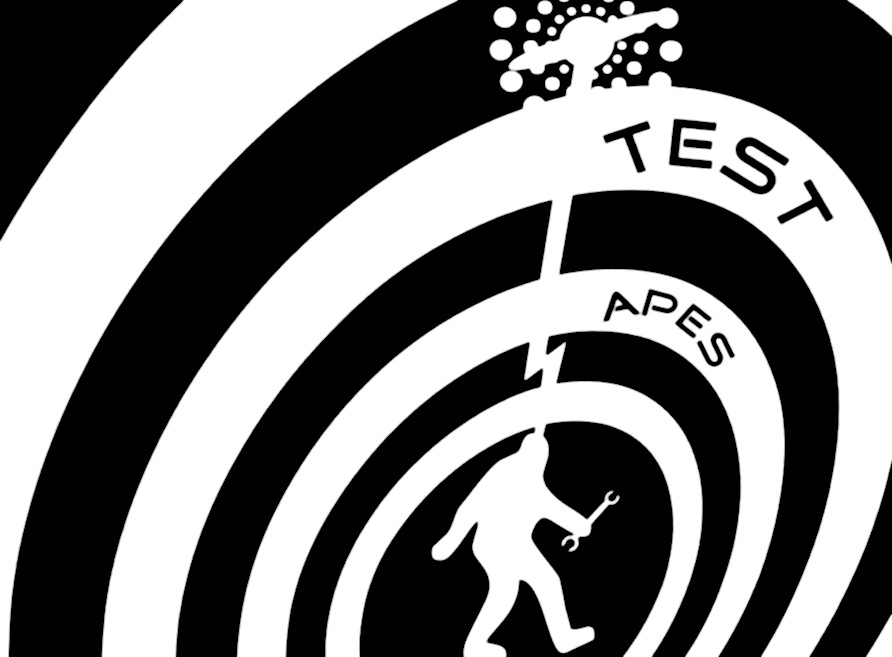 Man, it feels good to release that one.  For whatever reason, Mystery Tool is one of those projects I'm most proud of.  Its just a nice little ep, nothing fancy.

So, whats next for TEST APES?

Whats next, is more of the same, really.  We have a number of songs written and partially recorded.  There seems to be a couple more eps shaping up...but no titles yet.  Danny is in and out of town a lot, so our schedule is a tad spotty.  Still, things can move forward in some ways...I don't want to make any timeline promises, yet...but we're talking months, not years.
May 25th, 2015:

While Danny is back on the road with the Jeff Austin Band, tour dates HERE...I have been working (long-distance) with other projects, one an 80's kind of affair called MASQUERADE AS ANGELS in Austin, TX. and an UNNAMED-as-of-yet ambient/experimental/soundtrack kind-of-thing with JEFF KINART out in Hollywood, CA...both of which are going very well!  In fact, MASQUERADE AS ANGELS will probably have their own separate website up soon and all that good stuff.  I wish I could share some of the rough mixes with everyone. Oh well...

However, the plan for TEST APES is to master the next EP ('Mystery Tool') and get that out ASAP.   Its done.  Danny'll be on the road for about 2 more weeks, so not too much longer...

I've also been working on videos, and I have a few just about ready to release...

But first, I want to post the TEST APES video blog that I forgot to release about a month, two months ago! Whoops!!
SO, here's a short about the recording sessions that happened in December and January...
Also, Danny asked me to make a video for a song off his JUNIOR SAMPLED album! Here IT is:
April 12th, 2015:

Check out the new TEST APES video for a song off there up coming EP release, MYSTERY TOOL called "PRAIRIE DOGS"  On the new homepage for the EP--hit the button below to be taken there...
MYSTERY TOOL HOMEPAGE
April 6th, 2015:

go to TEST APES on Bandcamp.com ...or read, hear and watch MORE by checking it out on THIS site.
STRANDED ON EARTH homepage

TEST APES have booked a mastering session on April 2nd with Garey Shelton... a new release is imminent!
January 3rd, 2015:

Yesterday we had a very successful day in the studio over at Doug Brody's house.  Over an hours worth of audio was recorded with 6 new songs being written!  Meanwhile I am working on a video for our next release called "STRANDED ON EARTH"...
October 3rd, 2014:

We played a couple of gigs!  September 23rd and 26th in Seattle.  We survived!  It was quite an experience, and we learned a lot.

In fact, I'm pleased to announce our LIVE 3-song "single"

I experimented with trying to record and video the gigs, but did not have good results with the video I'm sorry to say, although I have a plan for next time...Plus we did get a pretty good sounding audio "report card" to listen back to and analyze what we did, and how we felt about it.

We came to our first gig (tah-dah!) with about 40 minutes of material-- sorta rehearsed. Like 3 times? Maybe 4? I know we were of the mindset like, that this was our first one, and we were just gonna have to take our lumps and learn form it.

When we got there, we were told we had as much as 2 hours, if we wanted it...gulp!

So we decided to man up, take advantage of that time and stretched out improvisationally for about an hour, then ran through our set of tunes. Looking back the next few days, we felt like some of the improvised stuff was more fun to play than the songs-- which were ok and all, and we played them alright --but were stiffer and even kinda confining compared to just playing whatever. Jamming is how we start writing a song, anyway.  So we had really done way more in that mode than really playing our songs from the record over and over to get them to sound tight... or like the record so we could promote a record...er, something...like a rock band might or something.

It was kind of an eye opener because we had not intended to be a free-jazz band or a jam-band, but now we’re thinking about it. Until then I think we were more oriented toward mostly playing our songs from the record, with some little improvised segue bits on occasion. Now though, who knows... There is something really exciting about an improvised jam that people react to, too. But it IS risky.  You have to not be in a lousy mood or in crappy health.   I love Sgt. Pepper styled multi track recordings, and some production slickness and all that, too...but it can’t be performed to sound like the record without hiring a large band.

I felt like we gave the crowd a good value by performing something un-rehearsed as well as rehearsed. During the second show, we started improvising off from the form of some songs with interesting results, too.  I've focused on a couple of those for the EP...But there is also a snippet of improv we both kinda liked and might make into some kind of a song someday.

The purpose of releasing these live recordings is to document a few of these type moments during these first shows.  Also a bunch of folks were curious what we would sound like live after we put out our first album that was quite multi tracked. So in addition, it demonstrates what TEST APES might sound like if you were to see us live.

So, yup, it’s a tease. Come see us play, if you can, and make us try hard. Then again, they are all gonna be recording sessions. So if you can’t make it, stay tuned for more live nuggets from our shows and you can be a fly on the wall...

hit the link below for a shortcut to the EP on this site.
SEA MONSTER RUNWAY
Next on our agenda is to work on our second album which is already way in the works, and look for places or events that we'd like to try to play.  If you have any ideas for us, let me know!

...And here is a link to the updated BANDCAMP.com TEST APES page!

Test Apes have finished their first album and are getting ready to perform shows, as well as continuing to compose and record new material.  I have taken all of the old news blurbs and videos, etc, and put them on the homepage for the first album;  chapter one is done.

And so, starting now on this page will be news about the next album, rehearsals, and what ever comes next.  Yea! 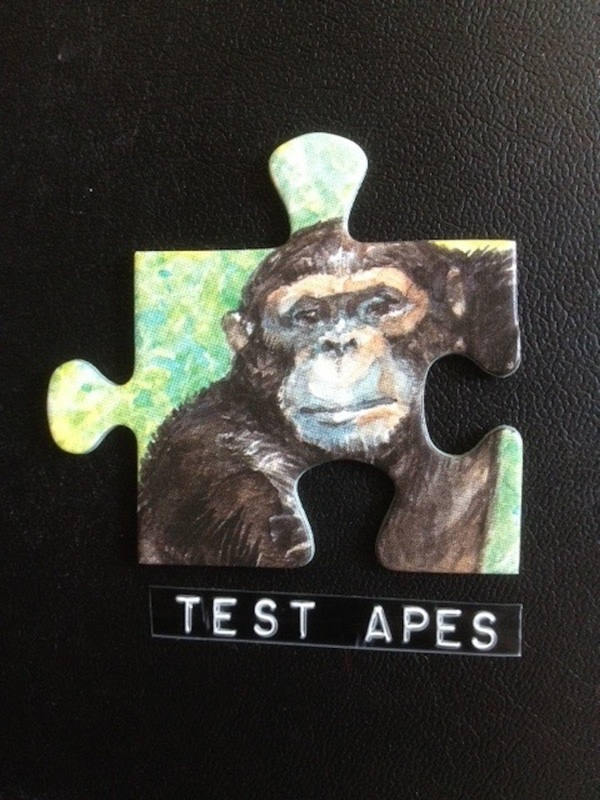