Max Brody's official website
I think I heard of Tobias Eriksson around 2002 after Pink Anvil had just released our first LP on Ipecac Recordings (a Ministry side project with Paul Barker and myself). It's a fuzzy memory, but I think he may have reached out to Paul and Paul had mentioned to me the fact that someone in Sweden was asking him about Pink Anvil and he had no idea that anyone anywhere would have even heard about the project outside of our circle of friends. It was too soon for anyone to have heard, no less someone in fuckin Sweden. So, I remembered the dude from that right off the bat. The next year when Ministry was touring in Europe I was able to meet up with him in Norway and we hit it off. I was amazed at his knowledge of local Austin bands including many of my friends bands and some others I had been in. At first I considered him an encyclopedic "superfan". Only later did I realize that he's a musician too. I had moved up to the pacific northwest by the time his band LIGHT SCREAMER made its way over to the USA to play shows. I heard reports from my friends about how great they were when they played Austin. It figures that they would get over there and I would be somewhere else...sigh!!

We had occasionally kept in touch and at one point I suggested we ought to go ahead and make an LP long distance, which he was game to do. Over the course of a couple years, he sent me riffs and improvisations in a raw form via email, which I edited into song structures and added to. He was quite patient with me as I worked on it between other projects. Eventually I sent a mix back to him, which he made suggestions about and had a notion to add some more singing. So he sent me additional vocal tracks and I edited and added them in before remixing the lot and adding sax.

To me, "Crestless Trough" sounds like a day in the life of a homeless veteran with major PTSD and addiction issues living wacked out under a highway bridge--with a beat.

I'd like to thank Tobias not only for his patience but for being my friend, working together creatively regardless of the barriers of distance.

I want to thank Max for making this project come together, from the initial idea of doing something together to all the work involved in putting my mindless improvisations into a coherent and interesting whole. I can never express my gratitude and love for you in words. I've always admired Max for being such a great musician, being capable of doing so many different things. I feel that we have a musical kinship in that we both like to express ourselves in sound. It's not just about writing songs, it is a heartfelt expression of something deep within. As much as "Crestless Trough" might be exploring the darker and danker parts of life, I also feel that it has a playfulness to it. There are parts that are genuinely emotional but there are also parts where the seriousness give way for the joy of experimentation. I kind of see it as having fun with darkness.

I also want to thank Brett Bradford for being instrumental in taking my relationship with Max from being a fan to being a friend. When all things are considered, this project is really a celebration of our transatlantic friendship. 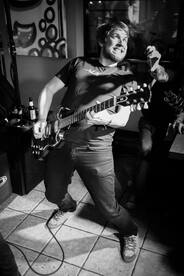