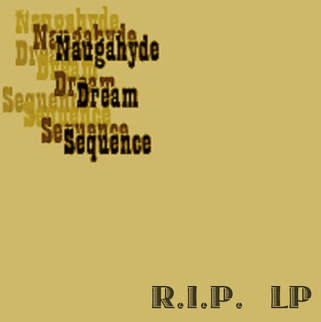 Granted, Naugahyde Dream Sequence is no Big Boys.  But if you were a fan of Biscuit’s or ever enjoyed Texas-styled, twisted, psychedelic ranting then you will want to hear the two records this unit created.  The concept was to bring ranting into rock, to create characters that could be used as springboards of performance, rather than a strict set of lyrics.  The music was a background for poetry-slam.  Biscuit was very proud of the first album, and was interested in doing more.

“Sweet Memories Of You” was recorded on August 14, just 4 days before his sudden death on August 18, 2005.  We were planning on starting a new band and I had him over to record him all by himself...just to see what key he would naturally tend to sing in.  I wanted to try to write songs in key signatures that would be natural for him to sing in and not be a strain for him.  Looking back, its so super creepy that there was a theme of death in these songs.  I swear neither of us were thinking he was about to die... there were so many plans being made right then...he had an art show, was helping with a fashion show, and just had a front cover picture and a big ol interview in the Austin Chronicle.  So, he was on a roll, and we were fixin to open a can of whoop-ass.

When he died it was a rug-pull, to be sure.  So, it took a couple of years before I could even listen back to the rough takes.  And then to hear all the references to dying...it kinda really weirded me out.  Since then, the computer that the sessions were created on crapped out.  Whats left are some rough drafts... but some pretty cool ones.  I’m sure Randy would want it out.  Poor quality can even add a little something interesting to a mix sometimes, but to me whats important here is the jazz-like quality of improvisation in a rock vein, with ranting for vocals rather than good old fashioned verses and choruses.  Biscuit prided himself on being able to be given a character and a situation to be in and to just go with it.

I do believe he was a genius at it... Our self titled LP demonstrates that, as does this, his very last recordings.

Who knew fate would put me in this position.  I have so much respect.  I’m kinda speechless.  I just hope I can do a good job of presenting the Swan Song of such a man as the one and only Randy J. “Biscuit” Turner.

Here is a LINK TO LISTEN...

Prior to 2000, when I made recordings it was on analog tape and we multi-tracked performances one on top of another to create the illusion of the perfectly performed ‘take’ of a song.  If we needed to go in and fix a clam on a take, it was kind of a pain.  We had to go through a big ‘punch-in, punch-out’ process and it was a bunch of risky work that could permanently backfire and ruin the otherwise 'precious' take...

Then I started using using some of the early ‘Protools’ digital audio interfaces to record.  That changed fundamentally not only what was possible to do with the recording process, but with song writing as well, big time.  The amount of control is still mind boggling to me.  Last I checked,  recording nowdays has 16 layers of correction!  (You can go back 16 steps), and there are a zillion ways now to record, create, capture, layer, slice, dice, edit, arrange, effect, rearrange, duplicate, cut, paste, etc, etc...


By 2002, then, I was really starting to re-define how I even wrote a song, based on this new technology.  Its an approach I use to this day.

NAUGAHYDE DREAM SEQUENCE was the first time that I started using what I would call a 'cut-up' style approach, to song writing in order to make a whole album for my own.  I had used a similar technique in MINISTRY by sampling bits of TV, RADIO and MOVIES, organizing a huge heap of samples into 5 categories, namely:  AMBIANCES, HITS , RHYTHMIC NOIZE LOOPS, and VOCALIZATIONS, which had some types...SCREAMS and YELLS was a special category, for example, and then straight up odd little QUOTES.  I always attempted to stay away from stuff that would be easily identifiable or just made sure the stuff was public domain.  I would take this to make loops, and then use them to make patterns and song structures to inspire and layer instrument and drumming performances and singing over.  Often there would be more rounds of edits, relooping, re-arranging, re-layering or adding/subtracting instruments and back again to edits...

In the case of NAUGAHYDE DREAM SEQUENCE, though, it went something like this:  I got some musicians in a room and jammed.  I recorded the jam, and chopped it up into usable and non-usable loops.  I used the loops to make song constructs, then layered on top of that.

Unfortunately, as I was conceiving of this way to work, I used a boom box to record me and my buddies Josh and JD (from a band called ‘Zulu as Kono’).  At the time I was still in MINISTRY and wanted some recordings to chop up so in my spare time on the road I would have some raw material to use for this and kinda practice chopping, editing, manipulating...  I just wish I had not used a boombox and at least used a cassette 4-track or anything with better sound quality and mixing control.  But that was just the beginning of the learning process for me on this one...

After I had made these song constructs, or song outlines if you will, I ended up playing them for Biscuit who really liked them...in fact, he offered to SING on them!

So I was alternately excited for the opportunity to work with such a great vocalist, but dreading the thought of actually trying to make these edited boom box recordings actually sound ok...

I resolved to polish the turd.

Literally dragging and dropping countless hundreds of drum samples and nudging each one into just the right spot so that there would be some tone to work with was a mammoth task I will never undertake again willingly.  Arg.  It was totally painstaking.  But, I was able to make quite a bit better drum sound that way, even if its not awesome.  Likewise with the other instruments, things were often doubled either by Jason or Mikey or myself or some combo of that.

Mikey’s guitar parts, by the way, were recorded to my laptop while we were getting ready for tour (at Sonic Ranch) and on tour for the MINISTRY album called “Animositisomina” (on the tour bus or backstage waiting to play while in Europe).

Later, in Austin, Biscuit came to me one day with a big pile of poetry.  He wanted me to see if any of it could be used for ‘the project’.  So I read through it and matched up items that I thought would go together.  Plus, for a few of the pages there was a big, long list of possible band names that he had come up with that was hilarious.  That list is where both of the titles TAXI CRAB NEBULA and NAUGAHYDE DREAM SEQUENCE come from.

As for recording Biscuit, we did some recording at my place, but then I suggested to him that I could just as easily come over to his house and try recording there since he might be most at ease in his own house to perform.  I’ve always thought that certain environments can bring out good performances, and Biscuit’s house was an amazing museum of bizarre objects that definitely had a vibe to it.  So we did that, too.