GOOBERSMOOCHERS was an on-going recording project that consisted of Mike Scaccia (Guitar, etc) and myself (Drums, etc) from a band called MINISTRY. The recordings were created 'on the side', as it were -- in dressing rooms, backstage areas, hotel rooms, busses, rehearsal rooms, wherever, and then home studios. Part of the purpose of the project was to relax, be experimental and mess around. Another part was to be serious... as we wrote songs for MINISTRY's "Houses of the Mole'" LP and then for some years afterwards, circa 2001-2008. We wound up with 4 LPs and 1 EP worth of material. This collection of songs is culled from the entire collection and represents, to me, some of our best material. It was pretty hard to choose. I love all of GOOBERSMOOCHERS recordings, but there is quite a bit of it, and much of it is kinda “out there”. I felt like an "intro to" LP would be helpful to attract more attention to this project...it should be remembered! I also went back and remastered them to squeeze just a little more juice out.

This is, by the way, the first time GOOBERSMOOCHERS music appears in a physical form. All of our material is available digitally, here, at: maxbrodyworld.bandcamp.

But now, CDs are available, & can be obtained by contacting: testapes@gmail.com

I feel so lucky to have had the opportunity to know and work with Mike. Its hard to believe, but TODAY, Dec 23rd, 2017, marks 5 years since his passing. Mike Scaccia was a badass, and was a genuine, nice fellow to boot. RIP, my brother.
-Max Brody
July 26th, 2015:

We also kept OUT of mischief on the road by recording ourselves with my laptop. It was a great way to pass time and be really productive. This would have been back around 2002-2004. That said, one song is of significance.  Its the one called "Strassburg", as that was the very last time that Mike Scaccia and Paul Barker ever recorded together... we were on tour in France in 2002. I can't tell you all the locations that this album was recorded but I can say that it was all over Europe and the US in hotel rooms, dressing rooms and on the MINISTRY tour bus.

Anyway, this stuff was made in a half-serious way, really. We were mainly just goofing around. Sometimes, though, Jourgensen would like one of the tunes and turn it into a MINISTRY song. Quite a bit of "Houses of the Mole'" was created in this manner.

Unfortunately, back then we wouldn't finish stuff, really. We just wrote stuff. If Al wanted to do something with it, cool. Otherwise we'd do most of the tracking and move on to the next thing that inspired us. I always made a pretty decent rough mix to listen to...

Time passed, and the recordings got shelved. I moved on to other stuff. He worked at GIBSON for a while but eventually went back to play for MINISTRY, and of course RIGOR MORTIS. Eventually the drive that stored all the sessions stopped working. I was left with unfinished songs and rough mixes.

Since then, I've resolved to finish the stuff. But it is hard to do sometimes. Kinda sad. Then again, sometimes its like another chance to work with Mikey! Such a JOY!! I've been very lucky to work with such a fine and unique musician as Scaccia... He really was amazing. Everyone who knows of him knows that he can shred metal solos til the cows come home, but he was way more than that. He had a unique style, but could also play in other people's styles. It was impressive. He was a fountain of riffs and song seeds in a zillion styles. He practiced all the time. Unfortunately, for the most part that side of him will forever be lost with his passing. That is one thing I am proud of with the Goobersmoochers recordings; they show a little of that side. He should have had a bunch of solo records. An acoustic guitar solo album from him would have been awesome.

Well, anyway... I did finally finish this one here today, and I'm proud to share it with you. There's a little more to come, so stay tuned...Cheers! 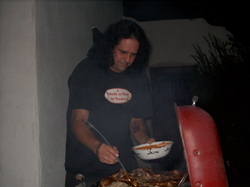 Its finally time to dust off some of these Goobersmoochers recordings that have been sitting in various external drives for years... and share them.  I apologize for the delay, and it really, really, really, really sucks that he couldn't see this site.  Its still a bit hard to even listen to this stuff... I can get choked up.

I still can't believe Mikey is gone.  But he is, and I want him to be remembered.  He deserves it.  He was the most super-talented guitar player not only in his speed, but in his taste, depth of repertoire and his general character.

I feel very honored to have gotten to work with this guy.  I hope that by sharing these recordings-- that we made just for fun-- that it  will help to show some additional sides to this multifaceted and underrated guitar player.  There was certainly more to this guitarist than speed metal.  He listened to and played any and all styles at least a little.  And he always played.  He practiced all the time...he listened all the time.

I'm not really sure how much Goobersmoochers material there is, but I reckon that it's around two and a half hours worth.  Some of it is pretty out there, or avant-garde or just plain annoying...I plan on putting that stuff out as its own little collection.  Some of it was made while I was still in Ministry.   The current 9 songs, however, were recorded after both of us were out of Ministry and before Mikey rejoined for like the 4th or 5th time or something.  And they are basically more straight forward instrumental rock numbers.  He plays guitar and bass, I play electric drums, sax and keyboards...and I think that's it on these tunes...I could be wrong, though...if you were on it and i forgot you...let me know...ahem... 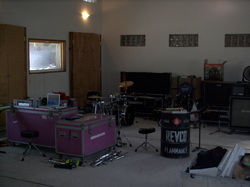 Here's one spot we did a lot of writing, both for Goobersmoochers, and for Ministry during its "Houses of the Mole'" recording sessions...

The building was brand new at the time, just added on to the already awesome Sonic Ranch studio in remote Tornillo, Tx.  We dubbed the room, "The Tornillodome", for it had to be the biggest room in all of Tornillo...not that that was to hard to do, but still...

For more information on this world-class facility, check out their website, at:               http://www.sonicranch.com

I cant say enough good things about S.R. & its people.  I wish I could stay there a month out of every year --forever!
Proudly powered by Weebly