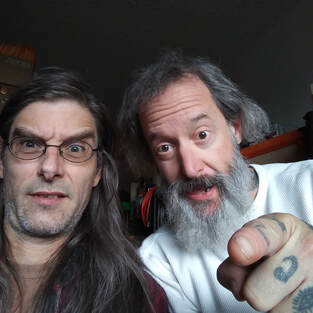 So I'd written another LP's-worth of material, was starting to record the basic tracks, and got distracted.  In mid November Jeff Pinkus (Butthole Surfers/Melvins/etc) came up to the Pacific Northwest on a groovy little solo banjo tour in support of his latest release "KEEP ON THE GRASS" (which is awesome and I recommend you checking out).  I was so happy to be able to host him for a couple of his days off during which we were really able to party down, er, catch up!  Yes, we did talk about re-releasing Areola 51 stuff...

When he listened to my latest ruffs and when I told him I was searching for good people to work with, he once again came up with what might turn into my next band situation.  Turns out Tad had suggested to the same guy that he oughta check ME out... So apparently the universe wanted us to meet.  His name is Ben Rew.  Check out the band CAMAROSMITH to hear an example of some of his past work... He is, well, let's just say an interesting fellow that I've had several good meetings with at this point and we both feel like we'd like to proceed.  He lives on the other side of town from me so there are logistics to work out and it can take a bit of time to get things rolling.  But at least I do feel like something is probably about to roll, and that's exciting.  I really want to play shows again.

That said, I will get back to finishing this as-of-yet-un-named LP, and hopefully it will be done by spring. I can't believe how this year flew by.  Sorry, I was not very active on social media this year.  I resolve to do better in 2020...!

I can't believe its time for a year end, in fact DECADE end report!

Released the Max Brody LP 49 & 3/4.
Released the CRESTLESS TROUGH LP, a collaboration with Tobias Eriksson.
Collaborated with TAD Doyle on one of his songs.
I worked out a live set from my latest LPs...lots of pre production...lots of practicing.
Played my first open mic as well as solo show on guitar jr!
Wrote my next LP.
Finished editing/engineering an LP for Something Weird Video of Spook Show Audio.  Super groovy!
Started an Instagram account, posted a bunch of old show flyers and a few pics.
Met local musicians to try to start a band...
Contributed to and appeared in a coffe etable table book called "MINISTRY--Prescripture--A Visual History", by Aaron Tanner and Melodic Virtue!
When I look back at what I've gone through in the last 10 years, it kinda blows my mind:

2010:  Divorce finalized, I moved in with my business partner D Kithcart and we made Darkstack Multimedia a way of life.  Late that summer I had a skateboard accident.  While taking it easy for a bit I picked up a 3-string guitar (first time) and got more into messing around with it than I thought I would, as well as decided to start composing all sorts of music rather than pretty much only aggressive music. I recorded GUILTY PLEASURE VOL 1; BEACH BOYS and composed and recorded SMITTY in secret.

2014:  Started Test Apes with Danny Barnes, my website, my bandcamp site, and re-releasing all my old stuff, finished editing and released my video blog from 2006-7, as well as worked on Fried Smiling, Masquerade As Angels and other long distance file swapping projects and some solo projects...until...

2018:  I pick the Guitar Jr up again to compose and record the LP HIGH STRANGENESS IN STEREOSCOPIC SOUND.  I get way more inspired and into the guitar jr than I ever thought I would... writing 3 more LPs worth of material in short order.  Wanting to bring some of the songs to life, I start practice by myself and looking around the area for musicians to work with...its really slow going.  Test Apes goes on a big hiatus.

2019:  I play my first open mic and first solo show playing my tunes, and on a guitar jr.  Tad asks me to contribute some sax playing on something and I do.  I ask him if he knows any musicians I might be able to work with, and he hooks me up with some names and numbers...Pinkus comes to town...& now I'm fixin to start a band with Ben?  We shall soon see! I feel so lucky that I am still able to pursue music.

I'd like to thank everyone for their continued support and I wish you all the best in the 20's! 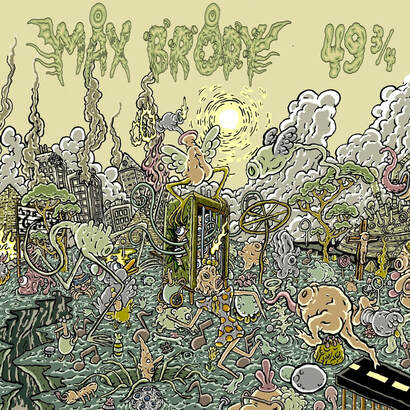 Last week the new LP was uploaded to Bandcamp.com... I'd like to congratulate and thank Mr. P. Earwig for another mind-numbing piece of artwork for its cover!!

I will be shifting gears now for a bit -- and return to working on a few side projects/re-issues while I search for musicians to flesh out this Max Brody band thing...
MARCH 12TH, 2019:

Hey there! My apologies for not posting here or on social media for the last couple of months...just taking a break from it, I reckon.  Last year's, "365 DAYS, 365 SONGS thing was a lot...I guess I took a break.

But I've been a busy little fucker...

Over the Winter I worked on a number of solar installations, which payed well (Thank You, FORECAST SOLAR!).  Unfortunately the state's solar incentives program expired and getting new ones passed seems to have hit a roadblock for now... which dried up the work...for a while... I'm also still working part time over at SOMETHING WEIRD VIDEO, where I've been working on some awesome audio projects for them...which shall remain nameless for the time being.  Anyway, because of the solar work, at the beginning of the year instead of nearly starving like usual I was in a position to invest in the dream of bringing some of my tunes to life...ahem!

In other words, AFTER ALL THESE YEARS and A ZILLION BANDS, I plan to form and lead MY VERY OWN BAND.  Yup, a MAX BRODY BAND.  Not a studio project, but a band.  Better late than never, or somethinks...  Anyone in the north Seattle area want to jam?  I'm checking out musicians near me...

I'm about to release another solo LP... calling it "49 3/4", since, hey I'm turning 50 next week! How's about that, eh?  Between the songs on 49 3/4, PLAGUEGROUND, and HIGH STRANGENESS, I believe there's enough for a live set that would be fun to see and hear.  I recently created a minimalist version of the songs I'm considering (stripped down to just guitar drums and bass) and was happy with the result.  It might just work, lol!

So, besides finishing off the LP and woodshedding, I've been researching and developing and basically geeking out on gear... to the point of not only getting amps and cabs, and developing an effects pedalboard, but even making my own custom DIY guitar junior, lol...  Its been super fun and inspiring!  You can rest assured that every bit of gear that I've gotten has been super researched and nerded upon... and my rig is, like, perfecto now...sigh...

At some point soon I'll show anyone interested a 'rig run-down' kinda thing.

I am also excited to mention that P. Earwig is providing me with album artwork again!  I've seen the black and white outline version for "49 3/4" and it is FUCKING AWESOME!  He's in the process of adding the color and will probably need a bit of extra time, though. That said, I'm moving back the release date from my birthday (March 21st) to April Fool's Day...and if he needs more time, he can have it.  What I AM going to do, though, is go ahead and release a SINGLE on my birthday.  So, there you go!  Keep your eyes peeled for a link soon...

I've also been collaborating and visiting with my old friend CHRIS BALLEW (aka Caspar Babypants/x-Presidents of the United States frontman).  We talked about the next CREEPY STICK material and dropped another ambient thing a few weeks back, which you can listen to and/or download for free here:

Masquerade As Angels has been working diligently on more material as well.  Last week I tracked drums on a new number called "THE SUN MAKES A SHADOW".  I will let everyone know as soon as it becomes available!

I think thats it for now...  Hope you all are doing well out there!

Whoa, its already time to do another year-end review?!  This year seemed to go by so fast...but I did manage to release some things that I am very proud of:

MASQUERADE AS ANGELS finished more songs...and rumor has it that there may be a CD release coming up next year... slow but sure!

I was also able to contact, re-connect and create a release for one of my old favorite Seattle bands, SORE JACKSON, complete with 2 CDs, a Booklet, a DVD and a couple of Stickers!  (the music is available as two free downloads HERE ...scroll to the bottom of the page... the video is available to watch, HERE)

On Facebook, I managed to drop a post every day with the theme "365 DAYS, 365 SONGS".  Next year I plan to branch out to different social media platforms... but won't be doing a post every single day, lol.  I will still be on Facebook...just less.  So far, I have started an Instagram account and a Minds.com account...

On Halloween, PLAGUEGROUND was released.  The next day I was interviewed by DJ WADE T on KSER in Everett, WA and given an opportunity to spin some of my own tunes as well as some old favorites.  Thanks again, WADE!
You can hear the program below:
In November I surprised myself with a burst of song writing, composing nearly an LPs worth of material in 2 weeks...which will become the basis of another solo EP or LP.  At this point, I am flirting with the idea of forming an trio or something...we shall see... over the last month I picked a set of tunes, rearranged/rerecorded them as a basic 3 piece rock trio, and liked what I heard!  I never EVER envisioned myself on a stage holding a guitar-like object...but I may just end up there! Gulp!!

There's a few other surprises in store for 2019 that I just want to keep under my hat for now.  My focus for the time being is finishing up this LP, practicing, visualizing and meeting local musicians...

As always, the word of mouth you yourself are able to provide is the best promotion and most appreciated of all!  Thanks to those that support me that way; its more helpful and appreciated than you may realize!
All the best to everyone in 2019!!
Powered by