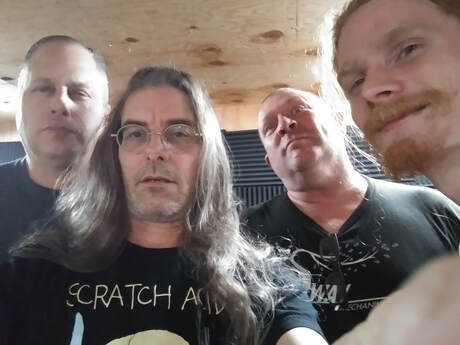 Hmmm, what can I say?  This website is starting its 10th year!  For the past 5 I've been in serious song writing mode like a dude in a cage or something. 2022 was the year I got out of the cage.  On the loose!  I did release a couple little things but it's been months since I've written anything or made a recording and I'm not sure when I'll get back to that mode.  My focus has changed, and it feels like a definite level-up!

This has been the year of SMEDLEY going live.  I'd been trying for a few years to find the right humans to start with.  The current incarnation of SMEDLEY'S RACKET got started near the end of 2021; Mark Hanna reached out to me and wanted to jam and reconnect (we had been in a band circa 1991-93).  He brought Isaac out to the jam and it was a fun one.  They both dug what I had been writing and liked the guitar junior weirdness, so it was game on.  Rehearsals lasted for 7 or 8 months.  During the spring we recorded a demo.  By June 2022 we played our first show, where I was so nervous that we played every song way, way too fast--ha!  I've learned a lot this year.  FEELS GUUD.

In July I got a call from TAD asking if I would be interested in laying down some sax tracks for a band that he was recording at his studio.  That turned into me being a sax player for AR BAND and playing a bunch of shows and meeting a bunch of nice folks and having lots of fun.  SMEDLEY'S RACKET played a few more shows too, as we kept on the lookout for a possible 4th member.  It's been nice to play shows again.  TAD had me back out to his place the other day to lay some sax on a song he was working on with his friend, GANNINGNIYA, which I hope sees the light of day cuz it's crazy sounding.  Thanks for everything this year TAD, by the way!

So, that is how I ran across Kent Lake since he is the lead guitar guy for AR BAND -- he came out to some of our early shows and liked it.  And I'm very happy to say he is interested in learning the lead guitar parts for SMEDLEY'S RACKET.  We have begun rehearsals as a QUARTET not only to get Kent up to speed, but to learn some more songs.  Now, at long last, at the end of 2022 BOTH bands are poised to play some mighty fun shows in the new year!  Let's keep em comin' so we can get real tight before we go into the studio.  Thats the plan, anyway.

WISHING ALL OF YOU STREGNTH IN THIS NEW YEAR and a Happy Bullstar!
Thank you for your kind attentions.  Cheers!!
Powered by