Although I wrote the songs and played all the instruments including some of the guitar, I had help big time from Jimbo Yongue in that department, and this stuff is sort of like a precursor to the SHIT SHERLOCK project where we got creative and actually wrote songs together. The song CHARLESTONED was co-written with him, though.

Mike Scaccia makes a cameo as well on BUNCHA FLIBBERTY-GIBBERTY...

I think its the 1ST time I put out full songs under my own name. 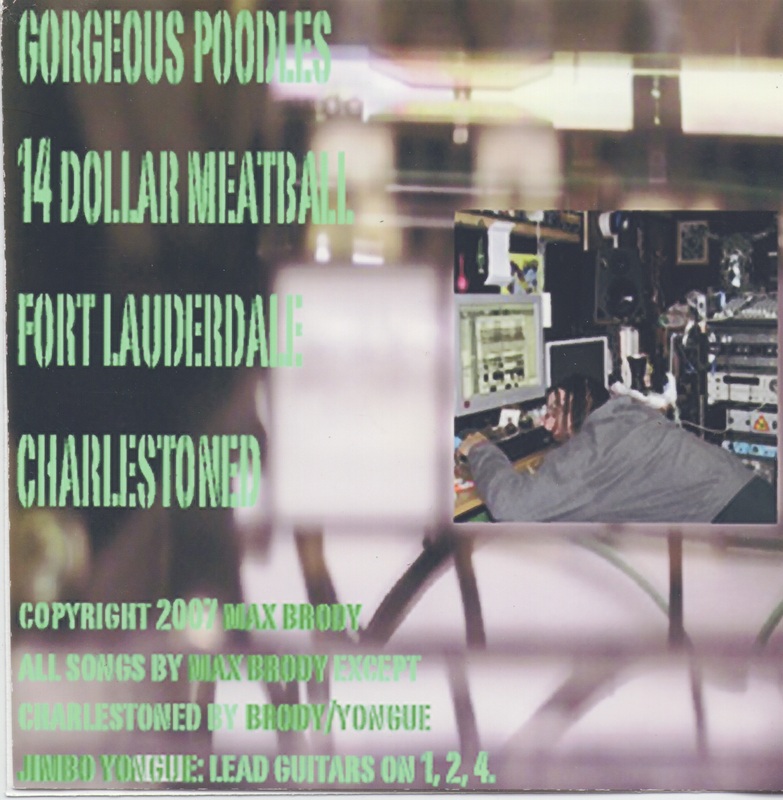 I continued to work on writing songs and creating recordings throughout the 2004-2007 period that were largely sample driven on computers, even though I was not in Ministry any more.  I guess I had learned how to do it and it was fun so I kinda just kept at it...

But I didn't share it, thinking that nobody really cared to listen, and it was just something I do for fun now because now I'm being a Dad.  My daughter Isabella was born in 2004, and I was able to stay away from any traveling gig for over 2 years.  I was definitely ready for some hometown time.

Then, I got offered work doing telecommunications installations "on location"...and got paid better than I had ever been paid, cash wise that is.  But being back on the road, I had ample time to spend on music-- while staying in hotels or even in the box van I eventually got and built into a living quarter/work vehicle.  I had a very mobile recording setup, but I could do what I needed to with it.  It did enough.  Around that time I met up with Jimbo Younge (Daddylonghead)  and I started asking him to add solos to some of the stuff I had been working on.  He did, and it really helped out a lot, so we started working on music more and more.  That eventually spawned SHIT SHERLOCK, a whole project unto itself.  But this was a little before that.

I created a 17 episode VLOG around this time you may find interesting...here is a link to EPISODE 1

Anyway, here is one review, from "bannedpromotions.com":


As much as I love two things that are often prevalent in music, there is no concept or story to this EP. But the EP as a thing, that emerged out of necessity for cheaper record production (but then evolved into its own statement) has always had its own special aura about it. It doesn't need a story. When records were actual records there was the LP and the EP, and the artist that knew what they were doing delved deep into concept and theme on LPs, and EPs were a way of saying "Here's a taste of what we're capable of. Want some more?" With the difference in running length meaning zilch in today's digital world the EP has become even more a sort of "taster", yet it has come to mean more specifically "this is the tastiest of what we're capable of. You don't need any more." Radiohead are a prime example of this. Their EPs are incredible and stand out far more than their albums. They're juicy, they're thick. They're covered in Worcestershire. But hey we're not talking about Radiohead we're talking about Max Brody.

But we are talking about steak... so if we compare this selection of songs - and I realise I haven't said it yet, so I'll say it now: it's a DAMN fine collection of songs. If we compare this selection to a steak it's an eye fillet. Now that happens to be my favourite cut yet there are so many ways it can be buggered up when it comes to the cooking process. In terms of song structure, soundscaping, instrumentation and what I'm gonna refer to (since this is a steak analogy) as grain, grit, or gristle (the "oomph", the momentum, the wackedness), the cut is better than one I would buy at my world-class local butcher. But the production side of things, where the delicate mix of natural fats, muscle, and oils (the "raw sound") mingle with touches of seasoning (EQ, compression, dynamics) and most importantly, convert that grainy, gritty, gristly stuff into "omg I'm fully licking this stuff off my fingers" residue. In the end it's all just a few minutes away from being a perfect steak. It's hard to say whether it's over-cooked or undercooked, but it's more like some other ingredient accidentally got thrown into the cooking process.

Having said that, an eye fillet is a fuckin' eye fillet man, and they taste delicious. This is delicious. But if Max Brody had a good producer behind him this shit would be "cooked" perfectly and I wouldn't have much to say in this review except "zomg steak drool", which I often do when I come across a really, really good collection of songs. So in the end it's missing something, mostly on the production side, to make it amazing, but is nevertheless very very tasty. 4/5 stars.